The Colony Police originally began as a Law Enforcement Committee. The committee was an advisory board to the City Council regarding police matters as well as a liaison between the citizens and the city government. When this board was formed, the city’s population was approximately 5000 and the last street north was Nash Drive. The board members would actually respond to calls; they were unarmed and did not know what they were getting into!

In 1978 The Colony Police purchased their first marked units, which were retired Texas State Troopers cars. The fleet is shown here parked at the old city hall / police station that was located at 4916 Main Street.

A police reserve group was also formed about this time and was armed and  certified by the state. Soon after the formation of the reserves, The  Colony added two full time employees; a Chief of Police and a patrol  officer. By 1981 The Colony police staff had grown to 11 full time  officers. Also in June of that year, The Colony hired 24 hour police and  fire dispatch staff, prior to which, all calls were routed through the  Denton County Sheriff’s Department. A few surrounding cities still  continue to utilize the sheriff’s department for dispatch, such as  Little Elm and Corinth.

The Colony then purchased several portable buildings which were originally used by Methodist Hospital as a portable clinic. These buildings were used as city hall as well as police operations and were located alongside the current Fire Station Number 2 at 5571 North Colony Boulevard.

On Saturday, October 3, 1987 The Colony Police; along with the city hall, library and the recreation center opened its doors at 5151 North Colony Boulevard To this date, The Colony Police still uses the same building that they share with the municipal court, but have expanded into the area previously occupied by city hall and the former council chamber converted into a courtroom. The city hall and library are now at 6800 Main Street.

Since The Colony was formed, it has had Seven Chiefs of Police:

Role in The Colony

The City of The Colony is a young dynamic growing community of about 45,000 and has been rated one of the ten best cities in the Dallas-Fort Worth Metroplex. The Colony Police Department is always striving to improve the quality of life within our community, and we feel this is best accomplished by a partnership between the police department and our informed citizens. We offer many services that assist citizens with staying informed such as Facebook, Twitter, and Crimereports.com, as well as many opportunities such as the Citizen’s Police Academy and National Night Out.

Thanks to the efforts of our citizens and the police department, the city’s per capita crime rate fell 14.5%, setting a 20 year record low crime rate in 2009 and in 2010 decreased 7% from 2009 setting another record low. Also in 2009, The Colony Police also received a first place award in a national competition for their new police car design. 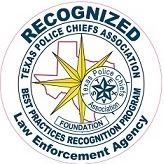 The Texas Legislature demands a great deal of professional law enforcement in Texas and the Best Practices were specifically designed to aid Texas agencies in meeting those demands and providing the best quality of service to the people of our State. Since its inception in 2006, over 100 Texas Law Enforcement Agencies have been Recognized and many more are currently in the process to become Recognized Agencies. While members of the Texas Police Chiefs Association recognizes and supports the national accreditation program, The Texas Best Practices Recognition Program has clearly become the new Gold Standard for Texas Law Enforcement! 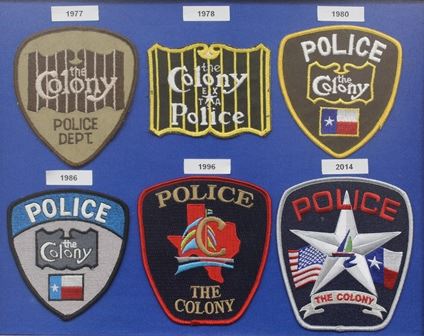 As The Colony Police Department has changed in time, so have our uniform shoulder patches. Since 1977, the shoulder patch has changed a total of 6 times. The current patch captures flags of our state and nation, as well as an iconic sail boat which is the city logo inside of a silver star.