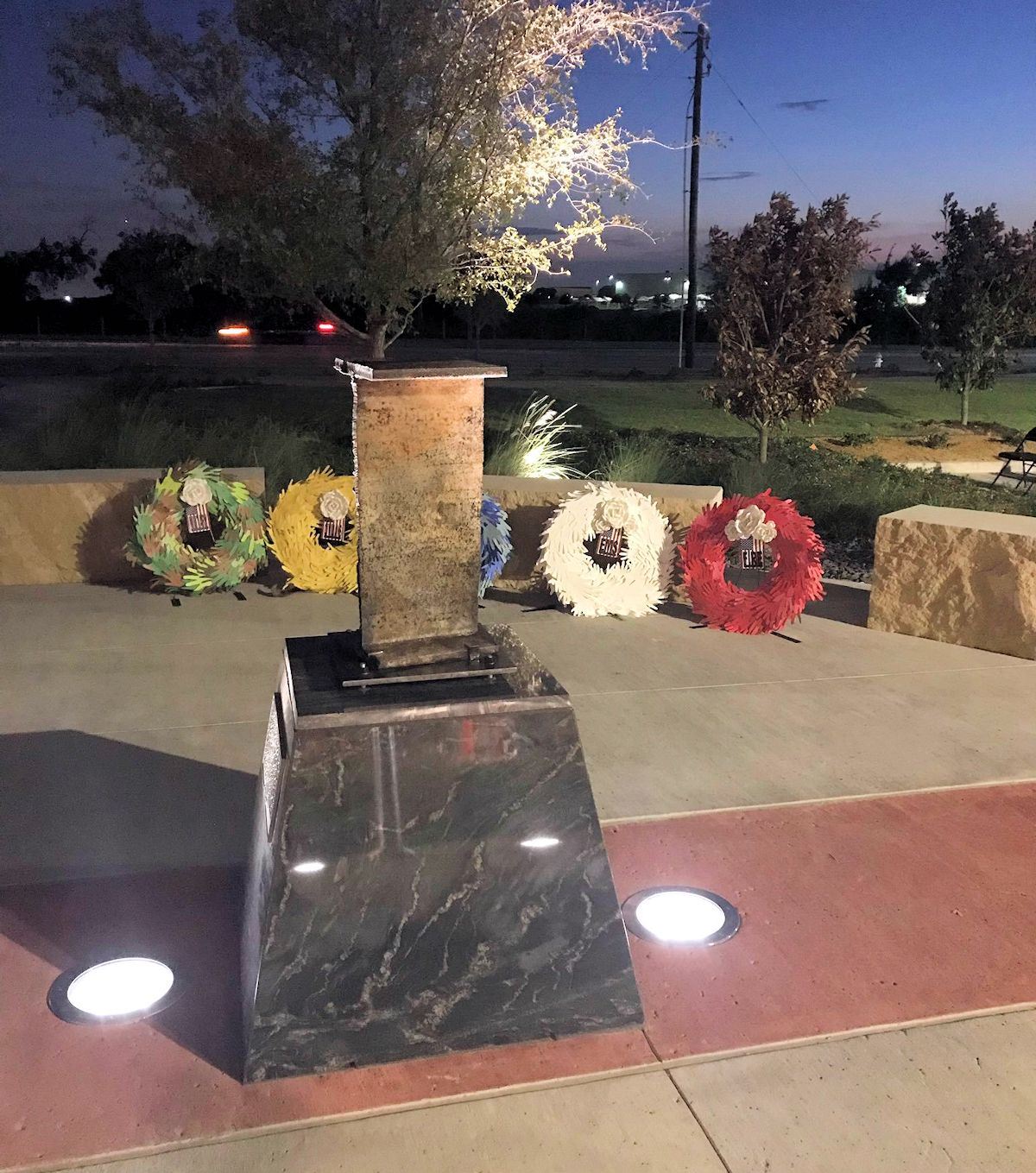 As part of an open house event in September 2019 at newly constructed TCFD Firehouse No. 4 (3400 Plano Parkway), The Colony Fire Department, alongside Officers from The Colony Police Department, conducted an installation ceremony for a long-held fragment of history formerly housed at Central Station: A piece of steel from the World Trade Centers. The steel was transported by ambulance and carried by honor guard to its permanent location for public viewing.

It is a piece of history that was created by both the single largest loss of life for the American Fire Service and an event that set the country on a course of change felt to this day. Because of this significance, great consideration went into the planning process of every aspect of the Memorial to ensure that this new piece of history was addressed with the dignity it rightfully deserves.

The steel sits upon an oval design. This oval represents the continuation of two measurements significant of Sept. 11, 2001:

Standing fast and surrounding the memorial are five limestone benches. Each bench mined whole – single, strong, and resolute – represents an unshakable force as a reflection of each branch of our United States Armed Forces: Army, Navy, Air Force, Coast Guard, and the Marine Corps. Each bench has been cut to exactly 68.6 inches in length. The sum of all five equal a total of 343 inches, which is a representation of the number of New York City firefighters that lost their lives on Sept. 11, 2001.

And finally, in full recognition of those 343 firefighters, the steel memorial is situated on a strip of red concrete as a representation of the "thin red line" representing the courage and sacrifice of all firefighters in service of their community and country.

On Dec. 3, 2009, the Honorable Alvin K. Hellerstein authorized the transfer of ownership of all World Trade Center artifacts being held for evidence in Hanger 17 of the John F. Kennedy Airport by the Port Authority of New York and New Jersey. The City of The Colony Fire Department was approved to receive this artifact, identified as I-Beam I-0003N of the South Tower, upon request by Executive Director Christopher Ward on June 20, 2011, with the promise that the artifcat will always be in reach of public contact in remembrance of all the lives lost on Sept. 11, 2001.

We, as members of The Colony Fire Department, feel it is our duty to preserve this history. The installation ceremony serves as our commitment to share this history with all residents and visitors to The City of The Colony. This site will always be open for all to view and share. We will never forget.